skip to main | skip to sidebar

I love the abundance of summer. I love the idea of pulling food from my backyard and making something super tasty with it. Standing in the hot sun, getting all scratched up trying to reach raspberries isn't the best thing to do, but it does have a bit of zen to it.

Often in the raspberry bushes, large spiders spin crazy webs just over the berries. Targeting the bugs, I guess, or, if really ambitious, maybe a small bird... hmmmm. What you learn as you pick, though, is that those apparently cut off berries can be snagged from a different angle, without having to touch any web.

Raspberry picking, like strawberry picking, involves patience and painstaking care, looking under each leaf, high and low on the vines. It struck me, as I picked the other day, that I need to approach problems in life with the same persistence - to take a new perspective when faced with a wall of spiderweb, and find the angle that's open.

Does beat hitting your head against a wall.
Posted by Aprille at 5:39 PM No comments:
Email ThisBlogThis!Share to TwitterShare to FacebookShare to Pinterest

Last Wednesday, I went out to support Dan's band, Moon Zombies, in a battle of the bands, competing for a spot at the 10 Ugly Men festival this summer. It was my first time hearing them and they are a boatload of fun. A couple of songs have stuck in my head, too. A good potential Derby band, hint, hint. Check them out here.

So then, on Sunday we went out to Mom & Dad's for Father's Day. Danny cooked steaks on the grill and I brought dessert. We sat and watched a bunch of the last Indiana Jones movie beforehand (Dad really liked the prep vs greaser fight at the coffee shop). 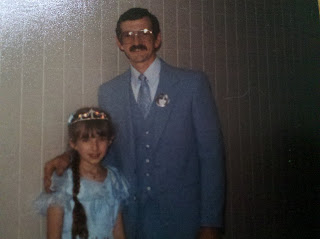 I hadn't made cake in forever and tried a new recipe from Moosewood Desserts - Maple Cake and Maple Buttercream Frosting (I put strawberry jam and fresh strawberries between layers). Here's how it came out. Quite yummy. I messed up measurements a bit, but it came out nice, so it'll prob be even better when I adjust it next time. 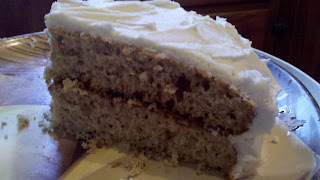 Books:
Book #8 - Death: The Time of Your Life by Neil Gaiman. A nice interlude to Absolute Sandman.

Book #9 - Absolute Sandman: Volume 3 by Neil Gaiman. J bought me this one for Christmas, so it was extra special because it was new and mine. :) Felt there was some diversion as people were at the Inn telling tales, but I know everything is more related than you might think, so I happily kept chugging. The Orpheus stuff was a bit rough.

Book #10 - The Perennial Philosophy by Aldous Huxley. It took a while to read because I took it in bits and bites, but I love the premise of highlighting the core beliefs that all faiths have in common and talking about something above them all that does not need the trappings of power or ritual. I don't necessarily agree with all of it, but do have lots of stuff highlighted.

Book #11 - The Beautiful Cigar Girl: Mary Rogers, Edgar Allen Poe, and the Invention of Murder by Daniel Stashower. This was really cool on several levels. The Mary Rogers case and the fact that it was never truly solved is intriguing. The details of Poe's life from a non-judgemental perspective. How he used the Rogers case to build on his new detective style. The abortionist who built a mansion on 5th Ave - the house built on baby's skulls (an American Horror Story relate).

Book #12 - Haroun and the Sea of Stories by Salman Rushdie. Once again Rushdie swept me away with the rhythm of his language. The book uses many techniques common to oral tales and would be perfect to read aloud. But this in a book dedicated to the power of Story in a sad world, when I am starting out in story myself. Loved it. Read it in a day. Want to reread.
Posted by Aprille at 9:37 PM No comments:
Email ThisBlogThis!Share to TwitterShare to FacebookShare to Pinterest
Labels: 50books, cake, dad

Getting back into the Twitter bookclub has been good for my reading pace, at least (since in my regular rotation I'm still slogging a bit with Henry James' The Golden Bowl). February was graphic novel month - it started with Book #3 - Understanding Comics.

Book #4 - Maus: A survivor's Tale and Book #5 - Maus: And here my troubles began by Art Spiegelman. I had heard about Maus in college, but never read it. While the mice have rather plain faces, they are so expressive. The father and step-mother, in their old age, were portrayed so well. It seemed like my grandparents had walked onto the pages (minus the Holocaust and Jewish faith bits). The story of the Holocaust is matter of fact, yet gut-wrenching. I found myself hoping "maybe this was as bad as it got" and then being proved wrong time and again.

Book #6 - Une Semaine de Bonte by Max Ernst. Wow. Incredible collage work. Although, I have to wonder about some of Ernst's sources for the image pieces, especially the worms and bugs. He must have been tied into some weird publications in order to come up with this. I love the style, except I lament the lack of text. I want a story, a narrative. Combine the surreal images with no text and I can't find one. I struggle to tie one image to the next, except they seem like different perspectives on a scene. Appreciate the art, but can't consider it a novel.

Book #7 - The Sandman: Preludes and Nocturnes by Neil Gaiman. I've read this several times before, but it's still really good. I especially noticed Gaiman's skill at conveying time and fatigue. I also liked the pages where things are a bit akimbo, off-balance, and the panels are all tilted. A really well-built and well-told story.
Posted by Aprille at 1:23 PM No comments:
Email ThisBlogThis!Share to TwitterShare to FacebookShare to Pinterest
Labels: 50books

We've been puttering a lot lately. Working on projects of our own. Collaborating a bit. J playing Minecraft, me crafting... It's quite cozy, though we need to make sure we don't both sit in our studies all night.

Book #3 - Understanding Comics: The Invisible Art by Scott McCloud. I finally got back into the Twitter book club (1book140) just in time for graphic novel month! Enjoying the conversation. This was the first read of the month. I really liked McCloud's points on characters (photo-realistic vs cartoon and their roles) and time portrayal across cultures.


Cartoon is a vacuum into which our identity and awareness are pulled ... an empty shell that we inhabit which enables us to travel in another realm.

When talking about time and storytelling in Eastern cultures, the recent read of Murakami was a perfect fit.
A really good treatise on a too much maligned form of storytelling.
Posted by Aprille at 7:33 PM No comments:
Email ThisBlogThis!Share to TwitterShare to FacebookShare to Pinterest
Labels: 50books

Remember back when we were kids and summer vacation lasted forever? For me, I think of tireswings, playing Star Wars (I was always Leia, as much as Susanne hated it, but she LOOKED just like Luke) with the gang, beestings, bubble gum, long drives to camping....

Today, you blink and 5 years have passed. WTH? It doesn't seem fair. All of those incredible moments just seem to slip through your fingers in the rush of adult life.


The more familiar the world becomes, the less information your brain writes down, and the more quickly time seems to pass.

Our perception of time can be tied to how much new information the brain is taking in. Those endless summer vacations as a kid (which Mom remembers as a series of "I'm bored" moans, I'm sure) held so many new experiences and encounters. As an adult, it can be easy to get consumed by routine. To fall into a rut of work, eat, TV, sleep (maybe with some chores and bill paying thrown in somewhere). Wa ... hoo.

What's awesome and captivating is simple - open yourself to fascination. Look at the world through new eyes every day. See, do, learn, listen, watch something totally new EVERY DAY and you'll catch more of those bits falling through your fingers. Time will slow, you can savor it more. And because you're endlessly fascinated, you'll never have to groan "I'm bored"......

I am so excited to embrace this. 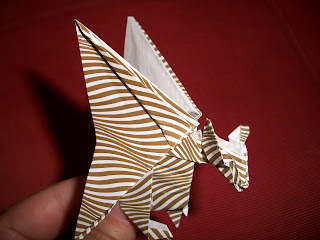 Posted by Aprille at 1:32 PM No comments:
Email ThisBlogThis!Share to TwitterShare to FacebookShare to Pinterest
Labels: fascination, time

Although he doesn't post it HERE, Danny has been crazy active in several bands, drumming away.

Here's one of the more recent posts on The Meta Accord's youtube site. Only thing is, you can't really see Mr, hiding behind a cymbal.


So I was intrigued to read about an experiment to see how drummers perceive time. The experiment was a collaboration of music producer Brian Eno and neuroscientist David Eagleman. It drew drummers across a wide variety of genres, including Daniel Maiden-Wood (Anna Calvi), the drummer from Razorlight, and Will Champion (Coldplay).


“The question is: do drummers have different brains from the rest of us?” Eno said. “Everyone who has ever worked in a band is sure that they do.”

So drummers EEG's were tested vs controls in respect to their perception of time.

When asked to keep a steady beat, for instance, the controls wavered by an average of thirty-five milliseconds; the best drummer was off by less than ten. Eno was right: drummers do have different brains from the rest.

Like perfect pitch, which dooms the possessor to hear every false note and flat car horn, perfect timing may just make a drummer more sensitive to the world’s arrhythmias and repeated patterns, Eagleman said— to the flicker of computer screens and fluorescent lights.

Reality, stripped of an extra beat in which the brain orchestrates its signals, isn’t necessarily a livelier place. It’s just filled with badly dubbed television shows.

I always knew there was something unique about how Dan saw the world...
Posted by Aprille at 11:36 AM 1 comment:
Email ThisBlogThis!Share to TwitterShare to FacebookShare to Pinterest
Labels: drum

Book #1 2012 Dead, She Said by Steve Niles and Bernie Wrightson. A dark, gritty, and quite twisted graphic novel.

As I clean my study, I come across tidbits from my Forgotten English calendar from last year. October 24 marked the date of the Dalton-in-Furness Fair, where the Lord would pick a few ale-tasters, assigned to visit all of the pubs in the town and taste the beer. They report back and prizes for the best are awarded.


One technique used by European aleconners was to pour a bit of a brewer's ale onto a pub bench. Wearing a pair of leather breeches, the official would sit in the beer for 30 minutes and then rise. If his trousers stuck to the bench, the brewer would be fined for serving inferior "taplash".

My question - does the dude get to change pants between pubs?

We finally got together to exchange gifties with Jenny & Aaron this weekend and the major craft give of 2011 was finally unveiled... 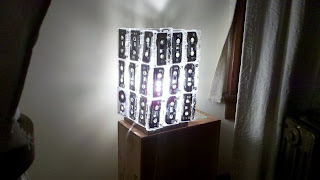 A lamp made from clear cassette tapes.

I had seen a couple of these online. Turns out the one I was trying to recreate actually used a specially molded plastic framework, but I adapted another version to get this.

I used 6 inch pieces of beading wire to hold it together. Here are some in-process shots. 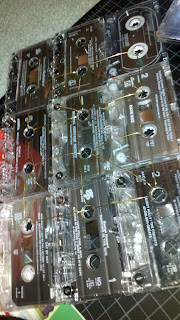 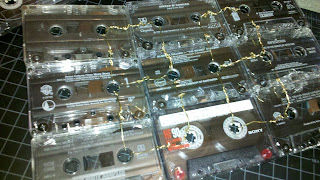 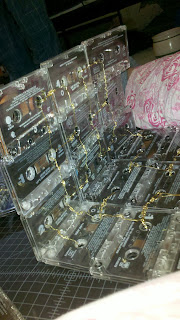